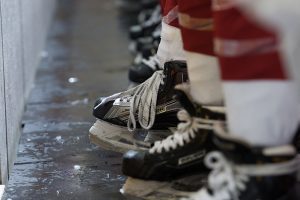 The Chiefs are pleased to announce that they have acquired 18 year old forward Trevor Peca from the Buffalo Junior Sabres of the Ontario Junior Hockey League.

In 50 games with the Junior Sabres last season Peca, who has secured an NCAA scholarship to Miami Ohio, scored 12 goals and added 36 assists.

Chiefs General Manager and Head Coach Brian Maloney is thrilled to be adding a player who comes not only with a strong set of skills but good character as well.

“When the staff and myself did our due diligence on Trevor the first thing that everyone said was he was a great kid,” said Maloney. “That’s important for us and what we’re trying to build here. He’s also a kid that’ll bring more speed to our forward group as well as a hard accurate shot. Adding more speed will help us to keep pushing the pace which is critical in today’s game.”

Peca is expected to join the Chiefs in time for this weekend’s road trip which takes the Chiefs to Vancouver Island for games in Nanaimo (Friday), Cowichan (Saturday) and Victoria (Sunday).