Two two-goal leads by Chilliwack were erased by the league-leading Coquitlam Express who rallied late in the third period to force overtime and eventually win in the shootout 5-4 Saturday night at the Chilliwack Coliseum to officially open the second half of the season.

It was a tough pill to swallow for the Chiefs who played a hard and gritty game.

Chiefs forward Nikita Nesterenko opened the scoring at 8:18 of the first period on the power-play. The Boston College commit worked his way down the left wing flank and feathered a cross ice pass in front of the Coquitlam goal that went off an Express stick and past Clay Stevenson to put Chilliwack up 1-0. Arlo Merritt extended the Chilliwack lead to 2-0 at 16:06 when he lifted a puck over the blocker side of Stevenson just in front of the goal mouth. But before the period was done the Express were able to cut the deficit in half with 61 seconds remaining on a nice effort by Josh Wildauer to keep the play alive in the attacking zone and turn and fire a shot from just inside the blue line that was redirected nicely by Greg Lapointe for his team-leading 20th goal of the season.

Coquitlam outshot Chilliwack 9 – 7 in the period.

Both teams traded goals in the middle period but not before temperatures rose between clubs after Express defensemen Addison Macey hit Nesterenko high. Brody Gagno came to his teammates aid and dropped the flippers with the Express rearguard that led to a game ejection on both sides along with two other coincidental minors after the scrum.  At 3:12 Trevor Adams converted his ninth of the season to restore the Chilliwack two-goal lead. Just over four minutes later Carolina Hurricanes draft pick Massimo Rizzo brought the Express back to within one with his 10th goal of the campaign.

Chilliwack outshot Coquitlam 11-7 in the frame.

The Chiefs held a 3-2 lead inside the final five minutes of play in the third period until Steven Bellini let go a shot from the right point that went off a stick and deflected past goaltender Mathieu Caron to tie the game. Thirty seconds later on the ensuing shift Kyle Penney brought the crowd back to its feet scoring his 15th of the season to put Chilliwack back in front 4-3. But with he goaltender pulled and the extra attacker on the ice Ethan O’Rourke planted himself in front of the Chilliwack goal and swept home the game tying goal from a shot from the top of the right face-off circle by Wildauer.

Nesterenko had a glorious chance to put the game away in overtime as he blew past everyone from centre ice and went in alone on Stevenson but the Chilliwack native came up with one of his biggest saves of the game to force a deciding shootout.

Chilliwack went 1-for-2 on the power-play while Coquitlam went 0-for-5. With the win the Express see their win streak reach 13 consecutive games and improve their overall record to 32-5 on the season, 20 points ahead of the second place Chiefs now in the Mainland division.

The Chiefs travel to Coquitlam Sunday in the back end of the home and home weekend set where the Express are a perfect 20-0 on home ice this season. You catch the play-by-play action with Vanni De Bartolo and Tyler Garrah on Produce Gone Wild Chiefs Hockey beginning with the pre-game show at 6:45pmz

The Chiefs next home game is January 4th against the West Kelowna Warriors. 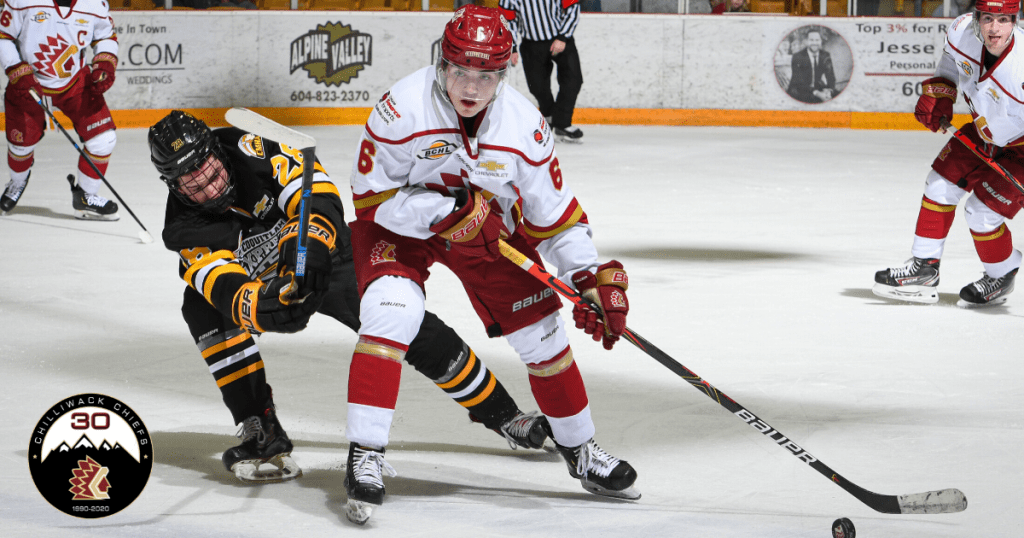