It was a good ol’ shootout affair between these two division rivals where the lead changed a combined six times in the game.

16-year old Hudson Thornton opened the scoring for Chilliwack at the 6:13 mark of the first period right as time ticked down from a penalty to Langley forward Stephen Sielsky. Thornton let a shot go from the right side of the point that beat Braedon Fleming on the blocker side right side of the net to make it 1-0 Chiefs. A minute and a half later the Rivermen would tie it on their first shot on goal. Kaeden Patrick beat Caron short side following a nice hit by Kalen Szeto on Peter Reynolds knocking him off the puck and finding Patrick who scored his 11th of the season for Langley to tie the game 1-1. Davis Murray restored the Chilliwack lead when he scored his second of the season from the right wing on a back hand that snuck through the legs of Fleming. With five minutes to go in the period Langley’s Helliwell scored his first of two on the night on the power-play to tie the game 2-2. Twenty-four seconds later Langley would grab its first lead of the night. Matthew Hubbarde scored his eighth goal of the campaign to give the Rivermen a 3-2 advantage. A minute and thirty five seconds later Kyle Penney would equalize for Chilliwack to round out the scoring in the opening twenty minutes of play. At one point in the period the shooting percentage to goal ratio was at 50% where every other shot was in the back of the net.

Chilliwack outshot Langley 8 – 5 in the period.

Twenty eight seconds into the second frame the teams would pick up where they left off. Tristan Fraser buried his 13th goal of the season off a juicy rebound given up by Caron to put Langley back out in front 4-3. The Rivermen would get into some penalty trouble midway through the period. Colten Kovich received a double-minor for interference and slashing on the same play at the 9:04 mark. Fifty seconds later Daniel O’Neill put his team down two-men for a full two minutes.

It was an opportunity that the Chiefs would not relinquish on scoring twice with the man-advantage to take a 5-4 lead into the dressing room after forty minutes of play.

Chilliwack outshot Langley 9-8 in the period.

Langley would get the only two goals in the third. Helliwell’s second of the night again on a power-play tied the game at the 3:25 mark before Bunting just over three minutes later jammed home his third of the season to give the Rivermen a 6-5 lead.

It was the fourth time in five games that Langley has defeated Chilliwack and the third game which ended in a 6-5 win in favour of the Rivermen.

Chilliwack 3-for-5 on the power-play while Langley went 2-for-7. The Chiefs outshot the Rivermen 25-21 in the game.

The Chiefs will host the Coquitlam Express Saturday January 11th at the Chilliwack Coliseum. The Express will roll into town on a 17-game winning streak. Game is 7pm. 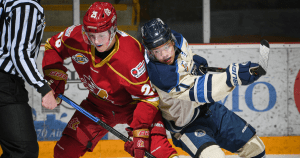