February at the Coliseum 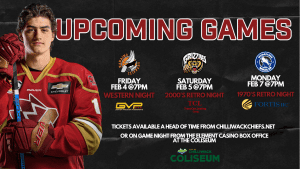 We’ll be rocking out to country music all night long as the Chiefs take on the Nanaimo Clippers!

Grab your cowboys boots and come on down to the Coliseum for an important Coastal Conference battle.

The early 2000’s tunes will be blasting as the Chiefs host the Victoria Grizzlies in our retro blue jerseys!

Pre-game Andrew Christopher will be singing the anthem before we’re joined by the children of some amazing Chiefs Alumni… They will be dropping the puck as well as playing a game during the first intermission.

Then in the second intermission, it’s a shootout battle between Mayor Ken Popove and 8-year-old shootout specialist Christian Vertes against Star FM’s Kenny Jones in net.  Christian is averaging 7 goals a game, so you will not want to miss this.

Plus it’s a chance to see one of the best lines in junior hockey… Victoria’s Connor Eddy, Ellis Rickwood, and Matthew Wood have combined for 61 points in their last 8 games.

It’s nothing but 70s music all night when Wenatchee comes to town on Monday! We’ll be wearing our retro blues for the final time on Monday!

It’s a true retro night! Skating out with our Chiefs, our 7th player of the game will be 90-year-old Leo Valentine! Leo has been playing hockey around the world for over 85 years.

In the first intermission, his teammates from Flickers & Friends Hockey will be playing the mini-game! The average age of the players will be 80 years old.

PLUS…Keep your eyes peeled for information regarding the online auction for our BCHL 60th anniversary blue retro jerseys.