Eagles eek out win over Chiefs

Hudson Schandor broke open a scoreless game just past the midway mark of the second period and Tommy Scarfone made 43 saves as the Surrey Eagles defeated the Chilliwack Chiefs 3-0 Saturday night at the Chilliwack Coliseum.

It was just the second time this season the Chiefs were shutout in a game, both coming on home ice.

After a scoreless first period in which Chilliwack outshot Surrey 19-8, Christophe Tellier made a no-look behind the back pass from below the goal line to hit Schandor in stride streaking in down the middle of the ice and he ripped home a shot past goaltender Mathieu Caron to put the Eagles in front 1-0 at the 12:19 mark of the second period. The goal extended his point streak to eleven games.

Scarfone did the rest for his club as he stymied the Chiefs time after time with many wonderful saves to keep the Chilliwack attack at bay. The 19-year Eagles goaltender was no doubt the best player in this game earning the first star in the match. It was his first appearance in goal since prior to Christmas Dec. 22 when he suffered a groin injury forcing Surrey to make a move at the trade deadline to acquire 20-year Reece Klassen.

In a potential first round playoff match up between these two teams, this game certainly had its moments of feel and look to one. Separated by just seven points now, these two teams will meet two more times in Surrey later this month over the Family Day long weekend.

Both teams finished 0-for-1 on the power-play.

The Chiefs travel to Langley Sunday afternoon to take on the Rivermen. Game time is 2pm from the George Preston Arena. The Chiefs return to action on home ice next Friday and Saturday when they play host to the Victoria Grizzlies (Friday) and Nanaimo Clippers (Saturday).

You can catch all the play-by-play action with Vanni De Bartolo and Tyler Garrah on Produce Gone Wild Chiefs hockey next Friday and Saturday for both those games beginning with the pre-game show at 6:35pm. 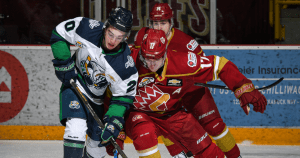