CHILLIWACK, B.C. – The BC Hockey League has announced details for the 2022 Showcase event, including dates, schedule, and location.

The Showcase is returning to the Chilliwack Coliseum and will take place over four days, from Monday, Oct. 17 to Thursday, Oct. 20.

Each team will play two games, one home and one away, in front of NHL scouts and NCAA coaches.

“Our annual Showcase is the first step for many of our athletes on their journey to receiving an NCAA Division I scholarship,” said BCHL Chief Operating Officer Steven Cocker. “Many relationships are built between players and coaches during the event, so this is always a very important part of our league’s schedule.”

“We are also happy to be returning to Chilliwack once again. The Chiefs organization does a great job working alongside our league office to make sure the Showcase is a success each and every year and 2022 should be no different.”

Chilliwack has hosted the event every year since its inception in 2012.

“We are honoured to continue to work with the BCHL on this premier event,” said Barry Douglas, Chiefs Governor and Vice President of Business Operations. “Our staff and volunteers take great pride in providing a first-class experience for the many players, scouts and fans that participate in this event in our community, while supporting local businesses.”

This year’s event will take place mid-week, instead of over the weekend, to give teams an extra opportunity to host prime night games on Friday and Saturday night. 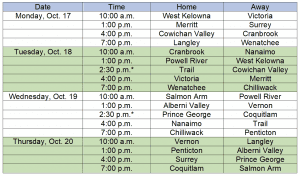 *Game will be played on the secondary ice surface

Ticketing information will be provided at a later date.

Sending more players on to college hockey every season than any other hockey league in Canada, the BCHL has established itself as a national leader in the development of young student-athletes. Considering today’s NHL features more NCAA alumni than ever before, Junior A hockey is fast rivaling other leagues in North America as a breeding ground for the sport’s most elite and successful players. In 2019-20 alone, there were 196 BCHL players who received scholarships to top schools in the U.S. and Canada.