It took over five years, but the Surrey Eagles finally did it. They finally won a game under the lights in Chilliwack on Saturday night beating the Chiefs 4-3.

Entering the night, the Chiefs owned a perfect 16-0 record over the Eagles in the last five years of play here in Chilliwack. But all that changed courtesy of some lackluster effort in the late goings for the home side.

The Chiefs came out hard in the opening frame, dominating puck possession and zone time.

Surrey rearguards Jimmy Darby and Kieran O’Hearn, two former Trail Smoke Eater defensemen, each took minor penalties just under a minute apart early in the game that seemed to set the pace of the period the rest of the way for the home side. Brett Willits tapped home a loose puck that slid across the goal line on the power-play to give the Chiefs a 1-0 lead early. Nikita Nesterenko scored his sixth of the season at the 18:25 mark of the first to stretch the Chiefs lead to 2-0.

Chilliwack outshot Surrey 21 – 6 after the opening period of play.

It was a much different story in the second period. The Eagles got goals 60 seconds apart from Brandon Santa Juana and Wyatt Schlaht to quickly tie the game midway through the stanza. Santa Juana’s goal came on the power-play and the next shot by Schlaht equalized the game. Garret Valk took a penalty at 16:48 of the period sending Surrey to its second man-advantage of the game. Hudson Schandor converted his ninth of the campaign on it to give the Eagles their first lead of the night.

At the 2:51 mark of the third period, Brett Rylance was able to even things up for Chilliwack with his sixth of the season. At the death, literally, with just under two seconds to go on the game clock, the Eagles pressured the puck in the Chilliwack zone and created a turnover. Holden Katzalay was able to get his stick on a loose puck in the crease and jam home his 12th of the season past Kolby Thornton to give Surrey its first win in over five years in Chilliwack.

The Chiefs now get set to face the Mainland Division-leading Coquitlam Express Sunday afternoon at 2pm at the Chilliwack Coliseum. 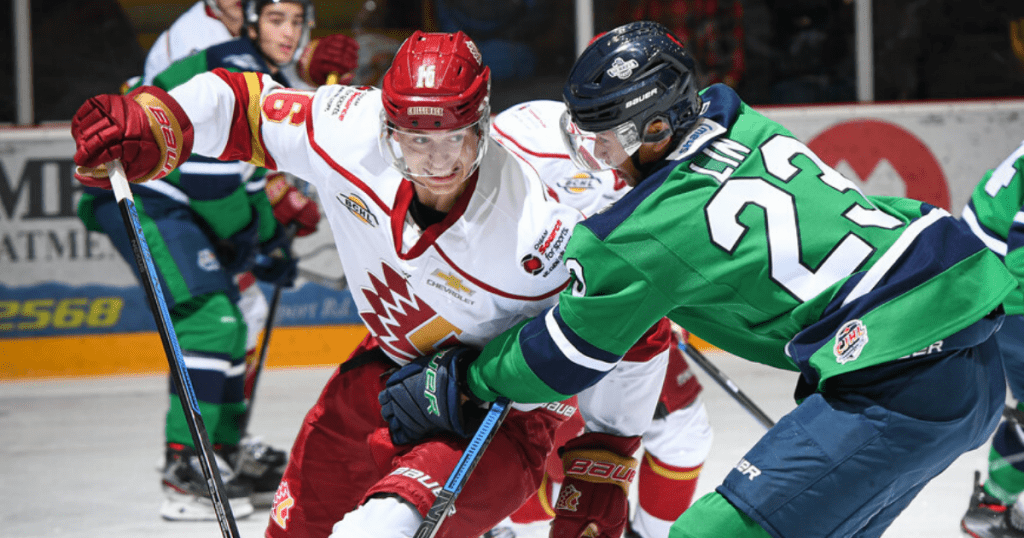