Nikita Nesterenko extended his point streak to eight games by scoring a goal and adding three assists as the Chilliwack Chiefs beat the Merritt Centennials 6-4 Wednesday night at the Chilliwack Coliseum.

It was the second straight game the Chiefs put up a six spot on the scoreboard.

Forty two seconds into the game Ethan Bowen opened the scoring for Chilliwack finishing off a beautiful cross ice pass from Hudson Thornton to make it 1-0 Chiefs. Tommy Lyons doubled the lead at the 3:53 mark scoring his 14th of the season on the power-play. Less than three minutes later Hudson Thornton netted his 5th of the campaign giving Chilliwack an early 3-0 lead.

Chilliwack outshot Merritt 18 – 7 in the period.

The Centennials would find a way to get back into this game in the middle period. Just past the midway mark Evan Benwell banged home a goalmouth scramble to get Merritt on the board. Then with the Chiefs on a power-play, Christian Buono lifted a puck through centre ice to spring Wyatt Marlow in alone on a breakaway and he beat goaltender Kolby Thornton to bring the Cents to within a goal at the 15:24 mark. Just under two minutes later, Thomas Manty drifted into the Chiefs zone on the left wing side and let a wrist shot go that beat Kolby high to tie the game 3-3.

Nesterenko broke the tie at the 8:50 mark of the third period finishing off a wonderful passing play between Lyons and Peter Reynolds to regain the lead for Chilliwack. Less than three minutes later off a face-off deep in Chilliwack territory, Brophy Dunne scored his first goal of the season from distance to tie the game 4-4. The Centennials flirted with danger a few minutes later when Benwell took a tripping minor that sent the BCHL’s number one power play to work. Less than a minute into the power play Jerzy Orchard took a high sticking penalty that really put the Centennials in trouble. It didn’t take long for the Chiefs to make them pay on an extended two-man advantage. Joey Larson scored his 12th of the season and team-leading 8th power play marker to give the Chiefs a 5-4 lead. Nathan Kelly added an empty-netter from about 190 feet away to put this one away in the final minute of the game.

The Chiefs power play finished 2-for-5 in the game while the penalty kill went a perfect 4-for-4. Chilliwack outshot Merritt 42-25 in the game.

The Chiefs open up a tough weekend set of games this weekend playing in Surrey Friday night before hosting the Eagles at the Coliseum Saturday night. Sunday Chilliwack travels to Langley to take on the Rivermen to cap off a three-game in three day weekend.

You can catch all the play-by-play action with Vanni De Bartolo and Tyler Garrah on Produce Gone Wild Chiefs hockey Saturday, February 1 against Surrey beginning with the pre-game show at 6:35pm. 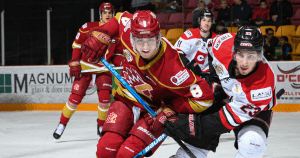