It was bound to happen. After two heart-breaking shoot-out losses to Coquitlam just after the Christmas break the Chiefs finally were able to solve one of Canada’s best junior ‘A’ hockey teams this season.

The loss ended the Mainland Division leaders win streak at 17 games, who prior to tonight had not lost since November 10 in Powell River.

Brett Rylance opened the scoring for Chilliwack at the 3:27 mark of the first period with his 10th goal of the season beating goaltender Jack Watson who was extremely busy in the opening frame. Shortly before the midway mark of the period, Nikita Nesterenko potted his 16th of the campaign to make it 2-0 Chilliwack. Then on the power-play Reynolds stretched the Chiefs lead to 3-0 at the 16:40 mark to cap off a dominate first period for the home side. And it was a pretty passing play that was finished off wonderfully by the Fraser Valley outfit.

Chilliwack outshot Coquitlam 16 – 12 in the period.

There was no scoring in the middle stanza.

Forty seconds into the third period Tommy Lyons ripped home his 9th of the season past Watson and less than two minutes later Reynolds most certainly put the game out of reach when he came in all alone on a breakaway from centre ice and chipped the puck over the right shoulder of the Express goaltender to make it 5-0 Chilliwack. The 16-year old Boston College commit completed the hat-trick at the 16:54 mark of the period. It was his first career BCHL hat-trick.

The Chiefs, who own the best power-play percentage in the league (1st overall 28%), went 2-for-3 on the man-advantage while Coquitlam went 0-for-5.

The Chiefs will host the Coquitlam Express again next Friday January 17th at the Chilliwack Coliseum. Game is 7pm. 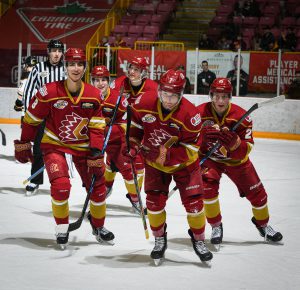