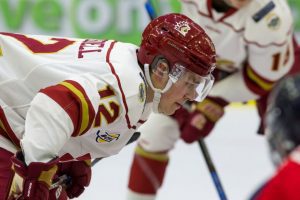 by Eric Welsh – The Progress

The Chilliwack Chiefs spotted the Cowichan Capitals a three goal lead, then roared back to win 4-3 in a hugely entertaining Friday night game at Prospera Centre.

In their first of two games at the BCHL Showcase, the young Chiefs tied the game on a late goal by Harrison Blaisdell and won it in OT on a goal by Kevin Wall.

The Chiefs have won four straight games and their record stands at 4-2-0-0.

Brodziak opened the scoring at 7:16. The 19 year old center took a chip pass off the boards from Millette, skated down the left wing into the faceoff circle and ripped a five-hole shot through Chilliwack netminder Mathieu Caron.

Millette doubled the Cowichan lead on a power play at 16:46.

Taking a pass from Brodziak in the high slot, Millette put a toe-drag move on a Chiefs defender before rifling a top shelf shot over Caron’s blocker.

Caleb Franklin led an odd-man rush, flying down the right wing. He put a centering pass into the slot where teammate Paul Selleck got a stick on it, directing it to his left. Jumping up on the left wing, Scott collected the puck and snapped it over Caron’s glove for his first of the season.

Chilliwack got on the board at 15:17 on a goal by Cole Donhauser, set up by a very nice offensive play by Ethan Bowen.

With his team on the power play, the 16 year old corralled a loose puck on the left wing wall, swooped through the high slot and over to the right faceoff dot before delivering a no-look backhand pass into the goal-mouth.

Donhauser snapped it past Grant for his third of the season.

The Chiefs got within one at 18:06 on a goal by Harrison Blaisdell.

A Cowichan defender blew a tire at center ice, springing Blaisdell and Bowen on a two-on-one rush. Coming down the right wing, Blaisdell kept the puck and lazered a shot past Grant for his 2nd of the season.

Chilliwack kicked it into another gear in the third period, out-shooting Cowichan 19-4, but for 18 minutes and 51 seconds it looked like it wouldn’t matter.

Early in the final frame Kevin Wall darted past Scott on a rush down the right wing and put a shot on net. Grant made the stop on Wall‘s attempt and then stoned Blaisdell on the rebound. The Chiefs kept coming and Grant kept stopping them.

But the biggest save came at the other end.

Caron gave his team a chance to come back when he made a massive penalty shot stop on Cowichan’s Olivier Gauthier. Gauthier came in slow on the left side and tested Caron’s glove, but the goalie flashed the leather and threw in a little windmill action as he kept the Chiefs within one.

That turned out to be huge.

After coming up empty on a 74 second two man advantage it seemed time was going to run out on the home team.

Caron came to the bench for the extra attacker with just over a minute remaining. Off an offensive-zone draw, Wall got the puck to the left of the Cowichan net. The rebound from his sharp-angle shot found the stick of Blaisdell, who brought the crowd to its feet as he whipped the puck into the cage with 1:08 to play.

Chilliwack complete the comeback at 2:04 of three-on-three overtime.

Carter Wilkie won an offensive zone faceoff at the right faceoff dot, drawing the puck to Wall on his left. Wall‘s lightning quick release caught Grant off guard as the puck whistled past him for the winner.

Chilliwack is back in action tomorrow (Saturday) night, taking on the Wenatchee Wild with a 7 p.m. start time.