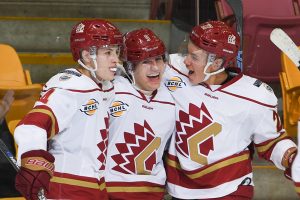 Kevin Wall had a goal and an assist and goaltender Mathieu Caron turned away 29 shots as the Chiefs defeated the Surrey Eagles 4-2 at Prospera Centre Sunday afternoon.

The win was the third straight for the Chiefs (3-2-0-0) who started the season with a pair of losses in Prince George.

The game didn’t start well for the Chiefs as the Eagles used a pair of goals from Eric Linell to take a 2-0 lead after twenty minutes of play.

For the second straight night the Chiefs dominated the second period. Goals by Ethan Bowen and Kevin Wall tied the game at two after two periods.

Goals by Cole Donhauser and Matt Holmes in the third period rounded out the scoring.

Chilliwack finished the afternoon 1/5 on the power play and 5/6 on the penalty kill.