The Chilliwack Chiefs are extremely proud to announce that 1999-born veteran Chiefs forward Brett Willits has secured an NCAA scholarship to Northern Michigan University. Willits originally came to the Chiefs in 2018 after suiting up for the Salisbury School, and the Mid-Fairfield Rangers program the previous season. A native of London, Ontario, Willits tallied 12 goals, 22 assists, for 34 points this past season. In the playoffs, Willits put up just under a point a game (3 goals, 3 assists) during the 7 game series against Surrey. Brett Willits became known in Chilliwack hockey circles as a player that would do anything for his team. Look no further than Game 5 vs Surrey ( a Chiefs 3-0 home victory) when Willits took a slap shot high off the face during the second period, was stitched up during the intermission, and returned to tally a goal and an assist in the 3rd en route to a 1st star performance!

When asked about what Brett has meant to the team Head Coach and GM Brian Maloney spoke to Brett’s character above all else. “Brett Willits is a person that is constantly putting others before himself. During his two seasons in Chilliwack, Brett was asked to do a lot of the less glamorous jobs for our team. He was a fixture as a penalty killing, shot-blocking, 200-ft centre and gave us his very best every shift he played in a Chiefs uniform. As an organization we are so proud of Brett that he has been able to fulfill his goal of securing an NCAA scholarship, and know that he will be a great fit at NMU.”

Brett Willits should look back fondly on his time in Chilliwack. He will be remembered by his coaching staff, teammates, and fans alike for his commitment to being a great teammate and leader.

Willits had this to say, “I would like to thank everyone involved in the Chilliwack Chiefs organization for making my past two years of junior hockey so special. Thank you to the fans, billets, and my teammates who have supported me both on and off the ice. Thanks to Brian Patafie and the training staff for making sure I was treated like a pro throughout my time here. Thank you to coaches Brian Maloney and Brad Rihela for believing in me and being crucial in my development as both a person and player. With that being said, I am extremely excited to play Division 1 hockey at Northern Michigan University next season. I cannot wait to start my college career. Thank you Chilliwack!” 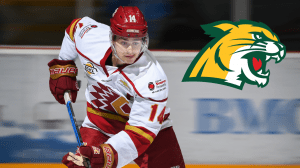