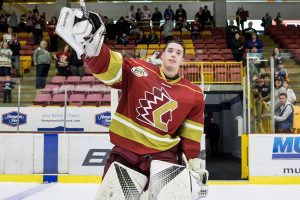 Mathieu Caron made 36 saves, including several highlight reel stops to earn his league leading seventh win of the season to help lead the Chiefs to a 3-1 win at Cowichan Valley Saturday night.

The win was the seventh straight for the Chiefs who improved to 7-2-0-0 on the season.

The Chiefs opened the scoring at the 12:37 mark of the game’s first period.

Defenseman Alex Marrocco earned the primary assist with a blueline to blueline pass that sprung forward Matt Holmes on a breakaway. Holmes wrist shot beat Capitals’ goaltender Matthew Waite through the legs. The goal was fourth of the season for Holmes. Brett Willits picked up the second assist.

Shots in the first period were 8-7 in favor of the home team.

Kevin Wall’s team leading seventh goal of the season gave the Chiefs a 2-0 lead with just over five minutes left in the second period. Once again it was Marrocco with the first assist as his point shot landed on the stick of Wall in front of the Capitals net. With no one near him, Wall calmly slid the puck across the goal line.

The Capitals got a goal from Lucas Vanroboys with just over three minutes left in the second to make it 2-1 Chiefs after forty minutes.

Defenseman Colton Kitchen’s first BCHL goal rounded out the scoring with 6:03 left in the third period.

Powell Connor started the play in his own zone with a pass to Jacob Slipec on the right wing. Slipec carried the puck deep into the offensive zone before spotting Kitchen who had moved in front the blueline. Kitchen’s snap shot fooled Waite and made the final 3-1.

Both teams finished the night 0/4 on the power play.

The Chiefs finish the weekend with a 2pm game in Victoria on Sunday.