Tommy Lyons scored a goal and added an assist and Kolby Thornton stopped 20 of 21 shots faced as the Chilliwack Chiefs snapped a five-game losing streak with a 3-1 win over the West Kelowna Warriors Saturday night at the Chilliwack Coliseum.

Minnesota Wild draft pick Nikita Nesterenko scored the first goal for the Chiefs for the fourth time in the last six games by opening the scoring at 16:59 mark of the first period on the power-play. The 18-year old Boston College commit used skill and patience to slip the puck into the net for his 15th goal of the season. The goal wouldn’t have come to fruition if it weren’t for the great effort by Cooper Moore at the blue line to hold the zone for Chilliwack. Moore dished a pass to Lyons to found Nesterenko out in front and he out-waited the goaltender Johnny Derrick to put Chilliwack up 1-0.

The Chiefs added to the lead at 6:49 of the second period when Lyons scored his eighth of the campaign. Peter Reynolds and Hudson Thornton drew the assists on the goal.

The Warriors finally solved Thornton late in the third frame when Holden Kodak fired home a shot from the right side of the ice on the power-play with the goaltender pulled to draw West Kelowna to within one. Moments later they almost found the equalizer. John Evans was parked off to the left of the Chiefs goaltender when a shot from the point missed the net and hit the end boards and popped right back out to Evans but the puck skipped over his stick when he was staring at a yawning cage. It was a fortuitous bounce that went the home sides way and kept the score at 2-1.

Then with 16 seconds to go Xavier Henry played a puck of the glass deep in the Chilliwack zone angled its way into an empty net to seal the victory for the Chiefs.

Both Chilliwack and West Kelowna went 1-for-3 on the power-play. The Chiefs outshot the Warriors 35-21 in the game.

The Chiefs continue their five-game home stand with a game against the Langley Rivermen on Friday, January 10. Game is 7pm. 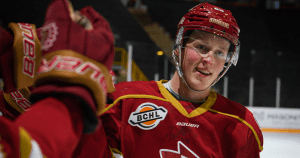