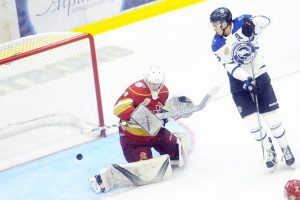 By Eric Welsh – The Progress

Carter Wilkie couldn’t have picked a better time to score his first junior A goal.

The Calgary kid, a rookie forward with the Chilliwack Chiefs, lit the lamp Saturday night during a 2-0 home-ice win over the Wenatchee Wild.

Nearly 200 college and pro scouts were watching as he did, and several wanted to talk to him in the Chiefs dressing room after the game.

“It’s unbelieveable the amount of exposure you get,” the 18 year old said, moments after wrapping up a conversation with a Massachussetts-area university. “I talked to a couple schools this weekend, about my grades, my interests and goals and basic stuff like that.

“They talk about what they can offer and how their school stacks up to others. It’s basically a meet-and-greet and then you get into deeper conversations later on.”

Every year, all 17 teams come to Chilliwack and play two games apiece at the BCHL Showcase, making it one-stop shopping for talent evaluators.

Wilkie, a lanky redhead with a nose for the net, was probably on a lot of scouts’ short-lists coming into the weekend after potting 20 goals and 43 points 36 games last season with the Calgary-based International Hockey Academy midget prep team.

“First impressions are a big part of it, so I felt a little nervous meeting these people,” Wilkie said. “But honestly, everyone has a good time with it, and if they want to meet you they’re obviously interested so there’s not too much to worry about.

“Just being yourself is the big thing.”

Wilkie’s first BCHL goal was a nice one, set up by Harrison Blaisdell.

Wilkie made a straight line for the front of the Wild net as Blaisdell carried the puck through the right faceoff circle.

At the last moment, Blaisdell dished a perfect backhand pass into the goal-mouth, where Wilkie was able to bang it in.

“It was unreal because I’ve had a little bit of a monkey on my back, had a couple good chances with my linemates setting me up,” Wilkie said with a grin. “It was a great pass by Blaisdell and I didn’t even see the puck go in the net. I just heard the siren go off and I was just ecstatic.

“If you saw my face it was probably a little dumb looking, but I was very excited and the boys gave me a good time about it in the room.”

The Chiefs had an excellent weekend overall, first erasing a three goal deficit in a 4-3 overtime win over the Cowichan Capitals on Friday.

Then the win over Wenatchee, which has them 5-2 and second in the league standings behind the first place Prince George Spruce Kings.

“Obviously we’re a team that’s younger and people might not be there for us, putting us where we think we should be,” Wilkie noted. “But we’ve got a good group that’s ready to come in and work day in and day out. We’ll compete against any team in the league, it doesn’t matter who it is.”

Chilliwack’s next test comes on the road as they take a three game swing through the Island division. They visit the Nanaimo Clippers Friday followed by a Saturday rematch with the Capitals.