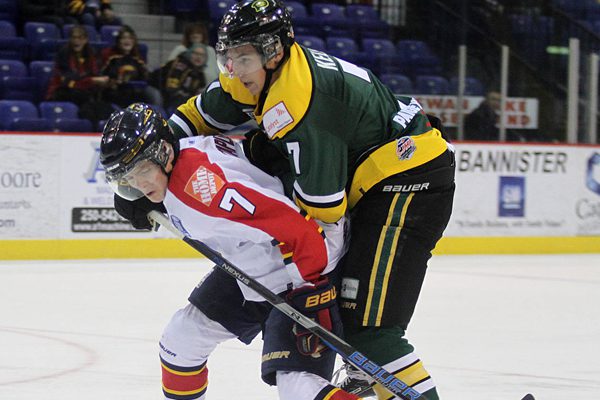 The Chiefs have acquired defenseman Nathan Kelly (2000) from the Trail Smoke Eaters in exchange for defenseman Powell Connor (2000).

The deal involved three teams as Kelly was moved from the Powell River Kings to Trail earlier in the day.

In 39 games with the Kings last season Kelly scored four goals and added eight assists. In fifteen games this season he has three assists.

Connor is in his third season in the BCHL all of which have been spent with the Chiefs. In 118 career regular season games he has six goals and 35 assists.

“Powell has been a big part of the Chiefs program but sometimes when you’re in the same spot for a while things can grow stale,” said Maloney. “Both Powell and I have been talking about his development and we both agreed that a change in scenery was best. Powell was a big part of our team but we also understand this is a development league and want to help kids develop whether it’s with us or elsewhere.”

Maloney is excited to add Kelly to the team.

“We watched lots of video on him and remember him from his major midget days. I came across some old notes I took on him and it was all positive. He’s a smooth and reliable player. His hockey IQ and character score off the charts. He’s not flashy but coaches love his type of player.”

Kelly is expected to be in the Chiefs lineup this weekend.

The Chiefs would like to thank Powell for all his efforts both on and off the ice during his two plus seasons in Chilliwack and wish him all the best in Trail.

For more information on this latest news keep an eye on the Chiefs Facebook live page later today.