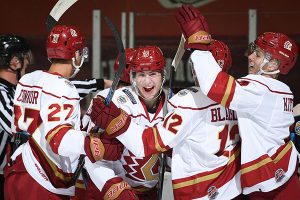 Ethan Bowen’s first two goals of the season paced the Chiefs to a 5-2 win over the visiting Langley Rivermen Saturday night at prospera centre.

The win was the second straight for the Chiefs who improved to 2-2-0-0 on the season.

The teams were tied at one after one. Daneel Lategan opened the scoring with a goal that should not have counted. Overhead replays showed the puck hit the crossbar without crossing the goal line.

Bowen’s first of the night knotted the game at one.

Harrison Blaisdell’s first of the season into an empty net in the game’s final minute rounded out the scoring.

The Chiefs finished the night 2/6 with the man advantage and 1/1 on the penalty kill.

Mathieu Caron earned the win for the Chiefs, stopping 23 Langley shots. Alex Rolfe made 41 saves in his BCHL debut in goal for the Rivermen.

The Chiefs are back in action Sunday when they host the Surrey Eagles at 2pm.