Another strong special teams performance by the Chiefs and a wonderful display of goaltending by Mathieu Caron who stopped all 32 shots faced lifted the Chilliwack Chiefs to a 2-0 victory over the Surrey Eagles Saturday night at the Chilliwack Coliseum. Chilliwack now leads the best-of-seven series 2-0.

It was a much better performance by the Eagles to the start the game in comparison from a night ago in game one of the series. Surrey was able to get some good zone time play in the Chilliwack end and generate a number of quality scoring opportunities only to be thwarted by the 19-year old Chiefs goaltender who made 14 saves in the opening period.

The Chiefs potent power-play went to work early just over five minutes in. Tommy Lyons sent a cross-ice feed in front of the Surrey goal that caromed off the skate of Arlo Merritt and past goaltender Tommy Scarfone to give Chilliwack a 1-0. From there on out the Eagles were again chasing the game.

Just over three minutes into the middle stanza Owen Nolan was called for a hook sending Chilliwack to its second man-advantage of the night. Joey Larson fired a shot from the right side that rebounded off Scarfone right to Ethan Bowen who swept home his first of the post-season to double the Chiefs lead to 2-0.

That proved to be more than enough offense for Caron and the Chiefs who continued to shut the door and contain the Eagles the rest of the way through.

Chilliwack went 2-for-3 on the power-play and a perfect 2-for-2 on the penalty kill. Surrey outshot Chilliwack 32-24 in the game.

The series now shifts to Surrey for game three on Monday night. Game time is 7:30pm.

You can catch all the play-by-play action with Vanni De Bartolo and Tyler Garrah on Produce Gone Wild Chiefs Playoff Hockey starting with the pre-game show at 7:05pm. 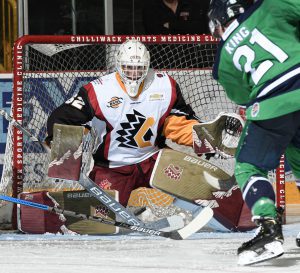