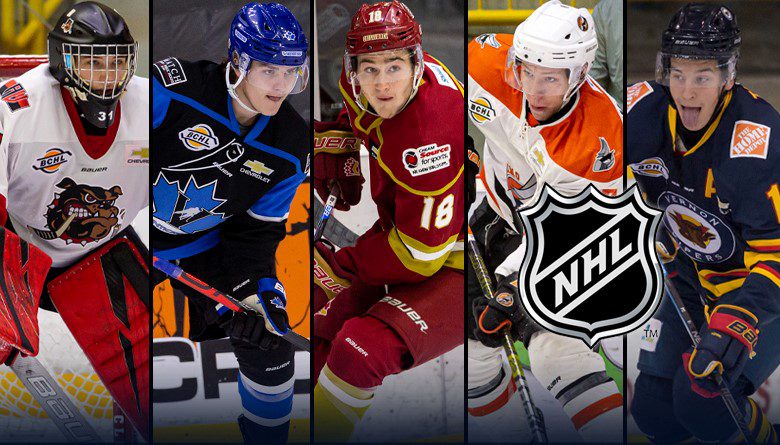 Burnaby, B.C. – NHL Central Scouting released its midterm ranking of prospects ahead of the 2020 NHL Entry Draft in Montreal and five BCHL players have made the list.

Bowen was enjoying a solid second season in the BCHL, before unfortunately injuring his wrist and has been out of the lineup since Nov. 28. Through 28 games played, he has nine goals and 17 assists for 26 points. Over his two-year career in the league, he’s amassed 65 points in 89 regular-season games.

In 2018 as an affiliate, the Chilliwack, B.C. native was part of the Chiefs team that hosted and won the RBC Cup on home ice, playing alongside his brother Ryan. He’s committed to the University of North Dakota next season.

Weight, from Lattingtown, N.Y., is currently among the top scorers in the BCHL, sitting 8th overall with 45 points in 45 games and his 19 goals are the most on the Vees who lead the Interior Division.

The 18-year-old is the son of former NHL player and coach Doug Weight and is in his second year of draft eligibility. He is committed to Boston College for the 2020-21 season.

Kovich is enjoying a breakout offensive season for the Clippers, already having doubled his point total from last year. He currently has 14 goals and 14 assists for 28 points in 38 games, compared to 14 points in 48 games in 2018-19.

On top of his on-ice prowess, the Coquitlam, B.C. native has also been recognized for his work in the classroom this season and was named the BCHL High School Player of the Month for October, which recognizes players with great numbers in school and in hockey.

Taylor is in his second season with the Vipers and has five goals and eight assists for 13 points so far this season. Over his two-year career, the Richmond, B.C. native has 26 points in 93 regular-season games and contributed another six points in 21 postseason games during Vernon’s run to the Fred Page Cup finals last year.

Taylor’s older brother Ty was a prolific goalie for the Vipers from 2016 to 2018 and was drafted in the seventh round of the 2018 NHL Entry Draft by the Tampa Bay Lightning.

Glassford, from Qualicum Beach, B.C., is in his first season in the BCHL and has the third-best save percentage among rookie goalies with a mark of .917 (sixth overall). He has a 12-7 record for a Bulldogs team currently tied for third place in the Island Division.

Glassford, like the other four players on this list, has been selected to play in the CJHL Prospects Game Jan. 14 in Hamilton, Ont. The game features the top-rated draft eligible Junior A players from across the country. He’s also the only BCHL player added to the list who wasn’t on Central Scouting’s Players to Watch list in October.

In total, 14 CJHL players were selected for the rankings. Click here to view the full list of CJHL players.