The BC Hockey League and the Chilliwack Chiefs announced the schedule for the 2022 – 23 season.

They will then make their Chilliwack Coliseum debut on Saturday, October 1st at 6 pm where they will match up against the Merritt Centennials.

“This is probably the best schedule we’ve ever had here in Chilliwack. The schedule was designed to not only give the fans the best possible experience but also mirror more of a college hockey format,” said Team Governor and Vice-President of Business Operation, Barry Douglas.

The schedule includes 14 Saturdays, which will see the puck now drop at 6 pm.

“We hosted a few extra games this past season at the Coliseum after the schedule was forced to change with the BC Floods. When we hosted those games, we went with a 6 pm start time. During those games, we got a lot of positive feedback and wanted to continue down that path,” said Douglas.

Across the league, this year’s schedule includes 83 per cent prime-night games on Fridays and Saturdays. Before the pandemic, the league hovered around 65 per cent over five years.

The schedule does not include dates for the BCHL Showcase, where the Chiefs will play two regular-season games. The schedule for that event will be released at a later time.

Single-game tickets will be available for purchase in July. 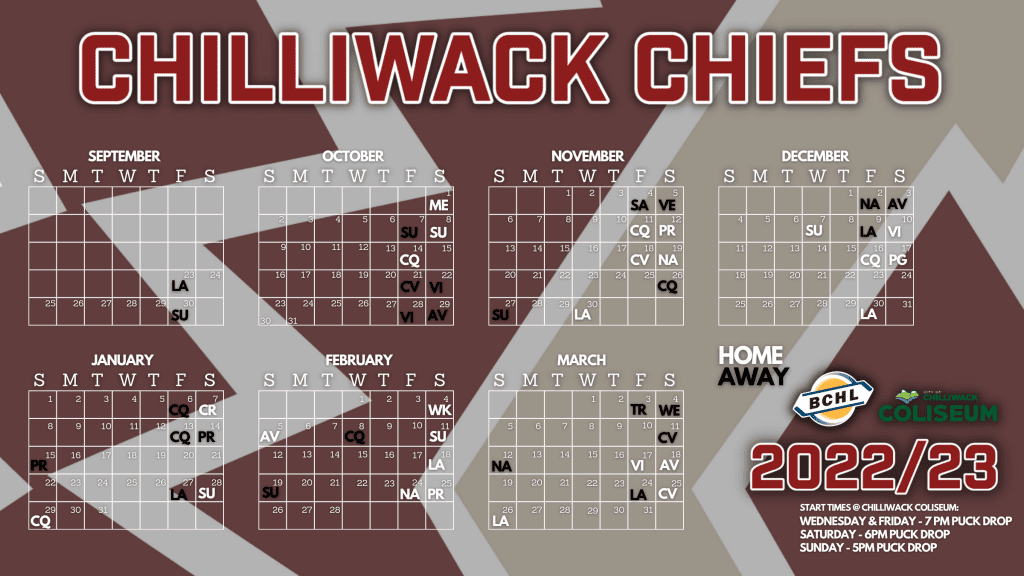